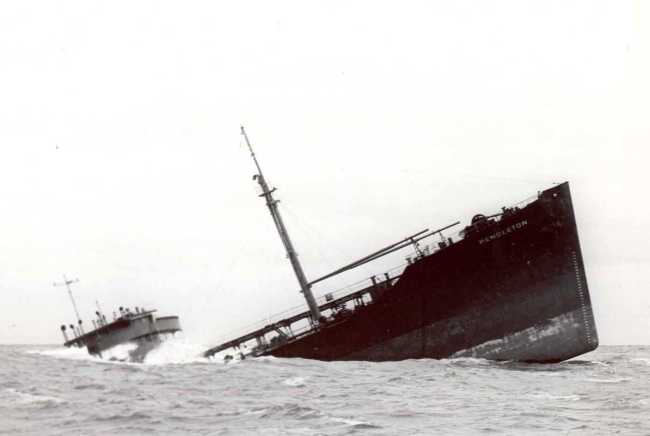 Tomorrow, January 29, 2016, Disney releases The Finest Hours, based on the book The Finest Hours: The True Story of the U.S. Coast Guard’s Most Daring Sea Rescue by Casey Sherman and Mike Tougias. The book, and I’m presuming the film since I haven’t seen it yet, tell the tale of “the greatest small-boat rescue in the sea service’s history.”[1] The sea service referred to in the preceding quote from the Washington Post is – of course – the United States Coast Guard.

If you are not familiar with the story, as most of us are not, please allow me to recap.

In the wee morning hours of February 18, 1952 while travelling from New Orleans to Boston, the SS Pendleton, a 504-foot steam turbine oil tanker carrying kerosene and heating oil, broke in two in a gale south of Cape Cod, Massachusetts.

The Pendleton was a T2 class oil tanker constructed and produced in large quantities for use during World War II. After the war many remained in service. However, there were safety concerns. The United States Coast Guard Marine Board of Investigation, conducted later that year, concluded that T2 tankers were prone to splitting in two in cold weather. Further, engineers later found that the steel used in wartime construction had too high a sulfur content. Lower temperatures turned the steel brittle.

No one knew this on February 18th and it’s unfortunate they did not. Pendleton’s transit off Cape Cod happened in the middle of the coldest month of the year. She was also pushing through 70-knot winds and navigating 60-foot seas. She was, quite literally, a disaster waiting to happen.

When the ship split, the crew was not able to send an SOS. The radio broke when the ship did.

Later that morning, around 8:00 AM, the SS Fort Mercer, another 504-foot steam turbine T2 class oil tanker carrying kerosene, also split in two. She was, believe it or not, also south of Cape Cod in that very same gale no more than 20 to 40 miles from the Pendleton.[2] Unlike her sister, however, Fort Mercer was able to send that famous dots and dashes distress call and the Coast Guard did what they’ve done since 1790: spring to action.

The problem was this: Fort Mercer didn’t know about the Pendleton.

And neither did the Coast Guard. They sent all their ships and aircraft to the Fort Mercer.

“At approximately 2:55 PM, radar operators at the Chatham Lifeboat Station reported two objects on their screen. At 3:00 PM a momentary improvement in visibility allowed lookouts at the Station to sight the bow of a tanker, the identity of which was still unknown. It wasn’t until 4:00 PM that an aircraft involved in rescue operations of the Fort Mercer, flew low enough to read Pendleton’s name.”[3]

This is where the story gets interesting.

Station Chatham launched two 36-foot Motor Lifeboats that day. The first on scene was CG-36383. She was originally sent to locate the Fort Mercer but diverted to the bow section of the Pendleton when the Coast Guard realized they had two rescues to attempt. Chief Boatswain’s Mate (BMC) Donald Bangs was the coxswain. With him was his crew of three: EN1 Emory Haynes, BM3 Antonio Ballerini, and SN Richard Ciccone. As Bangs and his team were putting out rafts, they watched as the lone survivor on the bow cast himself into the sea too soon and was lost. 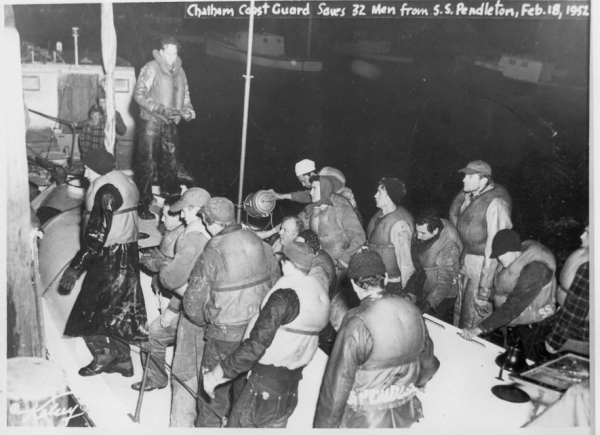 Shortly before 6:00 PM, the second 36-foot Motor Lifeboat, CG-36500, under the command of Boatswain’s Mate First Class Bernard C. Webber, departed the Chatham Lifeboat Station. Everything was fine until they hit Chatham Bar where the situation turned critical. “When we hit the bar I thought we smashed up,” said Webber. “The other men were knocked to the deck time after time. I thought several times I had lost my whole crew. They looked like goner’s but they managed to hold on.”[4]

CG-36500 was successful in locating the stern of Pendleton and they heroically saved 32 men. They then fought their overloaded and damaged boat through raging storm and treacherous waters back to safety.[5]

The Finest Hours tells this story.

As I’m always on that never-ending quest to connect families across time, I couldn’t help but notice the Bangs surname. It’s uniquely New England. More importantly, it’s in my family tree.

If you are a reader of this blog, you’ll know that I’ve commented about my descent from Edward Bangs, The Pilgrim, on more than one occasion. You will also know that I’m particularly proud of that heritage. Needless to say, when I saw Chief Bangs’ name in Casey Sherman and Mike Tougias’ book, I had to know: Was BMC Donald Hopkins Bangs a cousin?

BMC Donald Bangs, the skipper of CG-36383 who risked his own life during the Pendleton and Fort Mercer disasters off Cape Cod in 1952, was a direct descendant of Edward Bangs, the Pilgrim, who arrived in the Massachusetts Bay Colony aboard the Anne in 1623. Chief Bangs was Edward’s 7th great grandson.

I am Edward’s 10th great grandson. That makes Chief Bangs’ and I 6th cousins, 3 times removed.

What really intrigues me about the connection is this: I am also an active duty member of the United States Coast Guard.

Sadly, Chief Bangs passed away on September 20, 2003 in Scituate, Massachusetts before I knew we were family. Was I given a chance to know him, I would have said two simple words: Semper Paratus.

He’d know exactly what I meant.

[2] There seems to be some debate between web sites on how far apart the two ships were. Wikipedia says 20 miles while the official Coast Guard site says 40.

[5] Mrs. Sherry S. Stancliff for publication in the Golden Tide Rips of the Class of 1950 in celebration of the 50th anniversary of their graduation from the U.S. Coast Guard Academy. http://www.uscg.mil/history/articles/Pendleton_Mercer_Stancliff.asp

You’re nowhere without messy hair and a homemade banana shirt! My Saturday project is complete 😊
Latest creation. Definitely much better than the first!

Follow Families Across Time on WordPress.com
proof is in the bake
The Lunatic Asylum