In honor of Halloween, I thought it only fitting that I pass to you, my readers, the results of my first paranormal investigation. While not directly related to researching family history, I propose it does have a loose connection since those that have passed are members of someone’s family.

I wrote the below report within a week of concluding my visit to the Greenway Cemetery at Berkeley Springs, West Virginia. My wife and I had been stationed in West Virginia for about a year when I connected with a group of local paranormal investigators. As my initial foray into this mysterious world, I met my new friends in Berkeley Springs – about 30-minutes from Martinsburg. From there we drove to the cemetery.

“On Friday, June 11, 2010, I made my first foray into the paranormal by meeting some of the key members of the Martinsburg, West Virginia-based Another Dimension Paranormal Team (ADPT). Lead by Shelly Claypool [now Shelly Stitley], the team had been an organization for a few years and have claimed to have captured paranormal activity via photographs and digital means.

“I met the team at the Sheetz gas station in Berkeley Springs, West Virginia at about 8 p.m. that evening. It was a very warm afternoon and the gas station was extremely busy. As I sat waiting to meet the team, I wondered about how the investigation would go. The plan was to meet in Berkeley Springs to investigate a local home and, time permitting, a local cemetery. The team showed up right on time. As Shelly’s white Range Rover pulled into the parking lot, I could see other members on board. Present were Shelley, Chris Davis, the Case Manager, and Damien Stitely, the Equipment Technician. After parking near the house we were to investigate, we met up with Brantley, whose surname I did not record. Contrary to the original plan, the team started investigating the local cemetery, located conveniently near the original destination, instead of the house. Due to either miscommunication or change of plans, the owners were present and were not able to provide us the access we sought. Fortunately we still had the cemetery available.

“The team had investigated the Greenway Cemetery two weeks prior to June 11 and had some interesting results. In addition to photographing a few orbs, Shelly had found her cell phone missing at one point only to find it resting silently on one of the headstones. She did not recall taking the phone out or intentionally placing it on the stone. 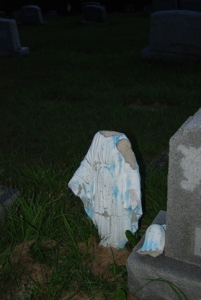 Something strange about seeing headless statues.

“The investigation took about 30-minutes as the sun slowly dropped below the surrounding hills. Because the team had yet to get permission from the local authorities to investigate after dark, we were forced to perform initial electronic voice phonemonon (EVP) and photography work before sunset. Because this was my first investigation, I opted to act as an observer and not heavily engage myself in the activities. I wanted to gauge the general dynamics of the team and their level of professionalism. I also wanted to test my use of the equipment I had (Sony IC recorder, Sony miniDV camcorder, and Nikon D80 SLR digital camera).

“As Chris walked around the cemetery taking photographs, Shelly, Damien, and Brantley began some preliminary EVP sessions by asking a series of questions. There were no reports of any audible voices during the sessions.

“After the cemetery, we attempted to investigate a cave located near the Berkeley Springs castle. Brantley claimed that there is a cold breeze emanating from the entrance. Unfortunately it was nightfall and we were unable to safely make the walk to the location. Chris and Brantley, however, did make a walk to that location only to find the cave secured with an iron gate. Consensus was that the “cold breeze” was simply the results of natural pressure between the internal, and cool, environment and the warm air.

“The investigation ended shortly after the attempted visit to the Berkeley Springs cave with an overview of all the paranormal equipment by their Equipment Technician. The time was approximately 10 p.m.

“I took 17 photographs at the Greenway Cemetery. Two photographs contained what appeared to be orbs. While this could be simply an insect reflection, the first coincidentally appeared in a photograph of the headstone where Shelly found her cell phone.” 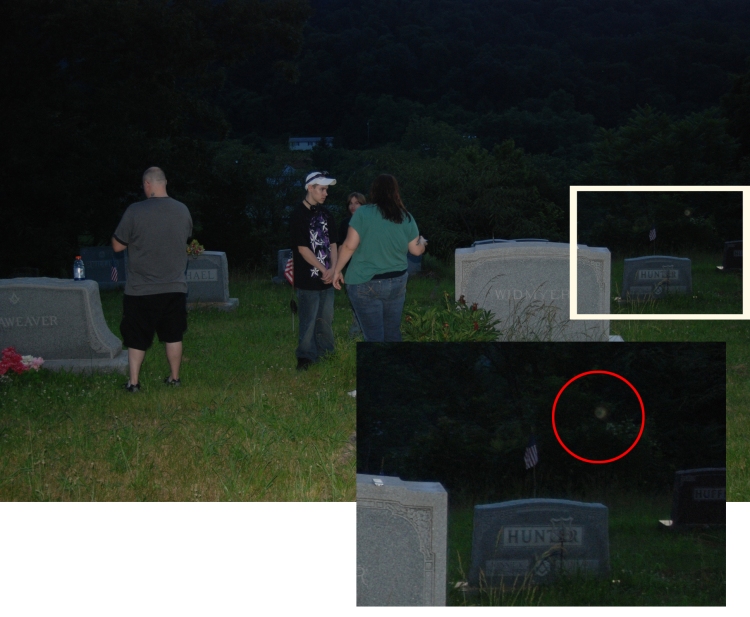 Is this strange orb proof of the afterlife?

“First, the digital recorder I was using is extremely sensitive to noise. I noticed that all sounds were captured, including background noise from a local baseball game, aircraft flying overhead, and every small rustling of feet. In the future I need to ensure that any EVP sessions are captured in complete silence. I also noted that the recorder picked up the on-off sounds of my camcorder and every sound of the Nikon as I took pictures. In terms of the camcorder, I will need to configure to eliminate the beeping sound it makes as I turn the machine from record to standby. I cannot do much about the Nikon but should probably comment before taking a picture. This will eliminate any confusion between noises I make and noises in the environment.

“Second, it would be beneficial to conduct some research prior to the investigation itself. From my perspective, I went in blind and did not know where the investigation was to take place. Researching the area first would have provided me with some interesting information that could have been of benefit during the EVP sessions specifically. From the historical records, in the 1950s an unidentified girl’s body was found in the area and buried in the pauper’s section (Potter’s Field) of the Greenway Cemetery. As of late 2009, her death remains a ‘cold case’ and she remains a Jane Doe.

“She could be one of the reasons the cemetery is considered haunted.

“Third, I realized that managing a camcorder, SLR camera, IC recorder, and associated supporting equipment is extremely difficult and cumbersome. My personal recommendation is to (a) obtain a smaller point-and-shoot camera, (b) use a tripod for taking video (stationary camera covering the “action”), and (c) develop an easier method for carrying equipment. On future investigations, it may be of benefit to focus on one discipline instead of all three. However, future solo investigations (e.g., the Trans-Allegheny Lunatic Asylum in July) may require the use of all.

“Finally, it would be helpful to have a traditional compass. Having one would allow me to identify direction of wind currents, positioning of geographical features, and alignment of markers (natural or other).

“The preceding text is accurate to the best of my knowledge.”

Another Dimension Paranormal Team (ADPT) remains active in the panhandle of West Virginia. See their Facebook page at https://www.facebook.com/ADParanormalTeam1.

« Drive-ins, gore, and boobies: My life as a teen
The First Thanksgiving? »