Music has always been a part of my life. While I never learned how to read or write music or play a musical instrument, it was always there. As a child growing up in the 1970s, I had the unique opportunity to experience music and television at the same time. I remember our family sitting in front of the old black and white cathode ray tube television watching the Sonny and Cher Comedy Hour (1971 to 1974), the Carol Burnett Show (1967 to 1978), the Lawrence Welk Show (1966 to 1982), the Donnie & Marie Show (1976 to 1979) and Hee Haw (1969 to 1971). I was definitely exposed to a wide array of music styles that helped me shape my tastes today.

My father was a music fan, too. He had a record player for years. If I close my eyes, I can still hear that distinctive clicking sound as the vinyl plate dropped to the turntable.

Anyway, his collection was not extensive but held many of his favorites. He had records by Elvis Presley, Herb Alpert and the Tijuana Brass, Mac Davis, Glenn Miller, Benny Goodman, and Glen Campbell. He clearly enjoyed country and big band music. As kids, my sister and I would often put on one of his Mitch Miller albums. A conductor and musician, Mitch Miller’s albums were basically sing-alongs. Inside the album sleeve were the lyrics to such songs as I’ve Been Working on the Railroad and The Yellow Rose of Texas. We’d spend hours singing along with Mitch and having a grand old time.

Playing with dad’s record player wasn’t always in his best interest since we were a bit rough with things. My parent’s solution was to buy us our own record player. I’m not sure if it was for Christmas or not, but they bought us a Kenner Close ‘N Play Phonograph. The record player was a small, red plastic box with a handle. You’d open the box, put in a 45-inch record, close the machine, and the song would play. It was marketed as a portable record player – and it was – but you couldn’t walk around and listen to your music. Records would skip if he box were jiggled. The sound quality was horrible as well.

My sister and I started building our music collection early on. Some of the first singles we bought were Right Time of the Night by Jennifer Warnes (1977), Do You Wanna Make Love by Peter McCann (1977), and Undercover Angel by Alan O’Day (1977). Looking back, I find it interesting that our earliest records were about lovemaking. The concept of sex, of course, was lost on us. We just liked hearing the words and listening to the music on our very own record player.

While Karen and I shared common interests in the beginning, we both branched out and developed our own tastes by high school. She became a typical Tiger Beat teen, enjoying artists like Rick Springfield and Shaun Cassidy. I went the other way and preferred music with a stronger rock and roll beat. Some of my favorites included Kiss, Iron Maiden, and Judas Priest. During my high school years in the early to mid 1980s, I was fortunate to have a friend that was uniquely able to straddle the chasm between the Rock and Roll Crowd and us Geeks. He would feed me music on cassette, drawn from his extensive music collection. He exposed me to a wide variety of music I would otherwise never have heard. One of those bands was a Canadian trio calling themselves Rush.

On May 9, 1981 I went to my first concert. I saw Rush’s Moving Pictures tour at the Memorial Auditorium in Buffalo, New York. Getting my parents to buy off wasn’t easy but they did. They agreed to cover the $8.50 cost and allow me to go with friends – one of whom owned a car. Moving Pictures, incidentally, was the first long play – or LP – album I ever owned. I bought it at K-Mart in Hamburg, New York. This was the very same K-Mart that Dad, Karen, and I had been shopping when the Blizzard of 1977 hit the Buffalo area. That particular K-Mart is now gone, replaced by Wal-Mart.

Our seats for Rush were located in the orange section of the Aud, well above the cloud line. Nevertheless, it was an experience I will never forget. The music was so loud it made my ears ring for days after. There were people smoking cigarettes, smoking marijuana, and smoking hashish. By the end of the show the smoke was so thick that you could barely see to the other side of the Aud. Folks were drinking so much alcohol that they were puking in their seats and puking on the floor right in front of us. We avoided the bathrooms for obvious reasons.

As rough as it seemed for a sixteen year old, I had an amazing time. Rush became the first in a long series of concerts over the next five years. I ended up seeing Triumph, Joan Jett and the Blackhearts, Journey, Judas Priest twice, Iron Maiden twice, the Eurhythmics, Thompson Twins, and Hall and Oates. I also got to see Eddie Murphy’s Raw tour. In those days, seeing musical performances was inexpensive and a good way to hang out with friends. Not so much today, unfortunately. With tickets approaching $150.00 for a nosebleed seat, it surprises me that concerts remain as popular as they are. I’m just glad I had the chance to experience the sights and sounds of the 80s first hand. 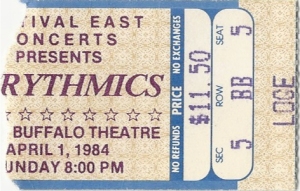