Whether it’s spiders, public speaking, or kittens, we all have something that makes our brains gush out chemicals that stimulate our fight or flight response. It doesn’t matter if we see it, participate in it, or simply think about it. It scares us and there’s not much we can do about it.

Although we are months from Halloween, I’ve wanted to expose my biggest fear for quite some time so I thought, “What the heck? Why not share it with the world?” My fear may seem trite but trust me when I say it spooks the poop out of me.

Once upon a time, in a galaxy far, far away, I was browsing through a used bookstore in Buffalo, New York. I was with my parents at the time and was probably 10 years old (about 1975). I remember finding a bunch of boxes beneath a table that looked intriguing. It was filled with musty old magazines. Not one to worry about cleanliness, I plopped myself on the dirty floor and began thumbing through, licking my fingers as I browsed from cover to cover.

Most of the magazines held no interest. I didn’t care to hunt or fish and I certainly wasn’t old enough to drive. My tastes leaned towards adventure and make-believe. I loved to watch Tarzan movies on Sunday afternoon television and I was drawn to movie makeup. I had started my collection of Famous Monsters of Filmland a year or so before and enjoyed reading about how they made Boris Karloff into Frankenstein. It was cool stuff!

But I wasn’t having much luck. I was nearly ready to hoist my now-asleep legs from the hard wood floor when a bright-red cover caught my eye. The February 1968 issue of Argosy magazine made my heart jump.

Argosy was one of the earliest American pulp magazines. From its inception in the late nineteenth century, it covered a gambit of topics that included children’s fiction – in the early days – to male-oriented adventure. In the 1940s, it changed again to include non-fiction. By the 1960s, it was more like an almost adults-only publication that featured some pretty risqué material. Nevertheless, the writing was good.

I slipped the magazine between a few others I found. I wasn’t sure whether they’d approve of the adult-theme but I had to have it. I don’t think they ever knew.

The feature article spoke to the now famous Patterson-Gimlin film. Roger Patterson and Bob Gimlin were horseback riding through the dense forests of Bluff Creek in the Pacific Northwest when, on October 20, 1967, they happened across a large, hairy beast lumbering across a clearing. Its gait was human-like but clearly not human. Wisely grabbing their camera, they captured 53-seconds of what would be forever be known as Bigfoot.

Even as a child, I could tell this animal was different. It was something totally unlike anything I had ever seen – even at the ripe old age of 10. I was fascinated but not afraid.

That all changed in 1972 when mom and dad took my sister and I to the Angola Drive-In. I highly doubt The Legend of Boggy Creek was the headline movie but that didn’t matter. It left its mark. 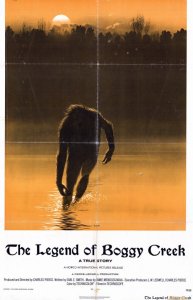 Even the movie poster is scary.

Boggy Creek was based on a true story that sets out to detail the existence of the Fouke Monster, a bigfoot-like creature that reportedly terrorized a small Arkansas community in the 1950s. It was described as having a foul odor, completely covered in reddish-brown hair, and having three toes. Locals from the small town of Fouke recalled their stories, often appearing as themselves, claiming that the creature had killed several large hogs as well as other animals. In one scene, a kitten is shown as having been “scared to death” by the creature. In another scene, hunters attempted to pursue the creature with dogs but the dogs refuse to give chase. A police constable stated that while driving home one night, the creature suddenly ran across the road in front of him. Towards the end of the film, the creature was shown menacing a family in a remote country house. After being fired upon, the creature attacked and sent one family member to the hospital. And that’s where the movie ended.

The Fouke Monster was eerily similar to the beast from Argosy magazine. The two were connected and both were more than willing to rip me to shreds.

I ran across the DVD version of The Legend of Boggy Creek at Wal-Mart two years ago. As I sat and watched the movie again, my intellectual side reminded me that the film was a dramatized story. No one really knows what these people experienced. It could have been bears or wolves. My emotional side, on the other hand, told me to stay the course and remain fearful. Maybe these people were telling the truth.

Yes, I’ll admit it: Bigfoot is my biggest fear. While I can’t always be sure that the videos I see on YouTube are truthful, I can’t deny the plaster casting I bought. Ten years ago I decided to look up these hairy creatures on the Internet. I came across a site that was selling books about the Honey Island Swamp Monster (Louisiana). For a few dollars I ordered a plaster cast of the creature’s footprint. It doesn’t look like the typical Bigfoot-like print but it’s strange all the same. My conclusion? If it’s real then Bigfoot is real. If Bigfoot is real, I’m not hiking alone in the woods. Period.

Me holding the plaster cast of the Honey Island Swamp Monster

« The AH-HA moment!
Down the Rabbit Hole »