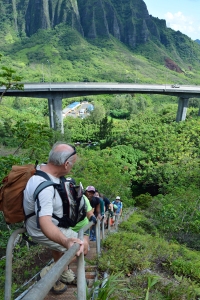 Ascending the Stairway to Heaven with the H-3 highway below.

With the verdant mountains literally looming above my head, I had the sudden sensation of traveling into a lost world. The lush tropical trees sang in the wind and I closed my eyes. When I opened them, I half expected to see a tribe of monkeys playing in the treetops. Instead, I heard thunder.

No, this was not your typical lightening and rain thunder but the echoing rumblings created by loaded tractor-trailers hurrying along the H-3 above. It was an unnerving sound that matched that seemed to match my mood. In about 30 minutes I’d be doing something I never thought I’d be doing: climbing the Haʻikū Stairs.

The 3,922-step metal staircase summits at 2,800 feet at the peak of Pu`u Keahi a Kahoe along the eastern Ko`olau mountain range on O`ahu. Known locally as the Stairway to Heaven, the Stairs were originally built in 1943 by the Navy to access transmission facilities at the summit. Initially made of wood, the stairs were replaced with galvanized metal in 1955. Although the stairs primarily served Navy and Coast Guard technicians, they also served local hikers.

Unfortunately the stairs were publicized in a Honolulu daily newspaper and the stairs became a major hiking Mecca. “By the mid 1980s, the Coast Guard registered up to 20,000 people a year to climb the Haʻikū Stairs.” For over 30 years they provided unprecedented access to one of the most beautiful views on O’ahu until they were finally closed to the public in 1987. We can thank vandals for that. In 2003, pressured by supporters of the Haʻikū Stairs, the City and County of Honolulu repaired the staircase at a cost of $875,000. Unfortunately land usage rights and liability concerns have prevented the Stairway to Heaven from opening.

However, today I was not a trespasser but an authorized hiker. I had previously exhausted all legal methods for accessing the stairs. Even my queries to the City and County of Honolulu were met with concerns. “It’s a liability issue,” they said. “Sorry, you can’t go.”

I was not about to give up. 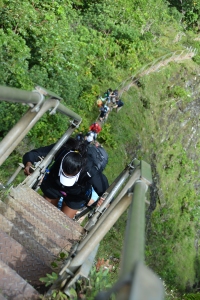 We continue to climb towards the top, steel latter winding down the mountain behind us.

I continued to ask for contacts and eventually learned about an organization known as the Friends of Haʻikū. This particular organization is the only group allowed access to the Stairs. Their role is to perform routine trail maintenance – pulling weeds, removing brush, and keeping the trail passable – once or twice a year. Despite its closure, the trail continues to see illegal hikers. Some bypass security at the trailhead while others cross the mountains from Moanaloa Valley or Tripler Hospital. In either case, the Friends of Haʻikū keep the trail clean. It lessens injury and avoids an embarrassing ride on a Honolulu Fire Department helicopter.

I met the Friends of Haʻikū in the parking lot of Windward Community College around 8 a.m. in the morning. By 9 a.m., there were a total of about 30 volunteers. We were split into teams. Each one would be sent to different levels of the Stairway to perform weed removal. I immediately volunteered to remove weeds at the top. As my only opportunity to climb the stairs, I did not want miss out.

I jumped in the back of someone’s pickup truck. We went through the College entrance, spoke with the security guard, and skirted the College’s buildings to a well-hidden dirt road. We past through two locked gates and stopped at the foot of the trailhead. When I hopped out, I immediately looked up at the mountain. I could feel the adrenaline. The Stairs were bigger than I thought!

Within minutes my group departed the staging area and began the ascent. Crossing another two fence lines – one of which we had to shimmy around – we started up the first set of stairs. My first thrill was seeing that I was parallel with the H-3 highway. I recalled what one of the volunteers said: “If you are on the Stairs, don’t wave at the passing cars.” I wondered about this until someone commented that waving could be interpreted as needing help. None of us wanted the attention.

For the next 45-minutes, we steadily climbed stopping only to mark loose steps or shaky handrails. In some cases I found myself climbing stairs that were nearly vertical. Was I nervous when I noticed the latters were only attached with a few small steel bolts? Absolutely! If they had pulled free, I would have tumbled down the side of the mountain.

At the 2,500-foot mark my team reached the upper Hoist house. The Hoist house, or cable car house, was originally designed to bring a small utility cart up the side of the mountain from the valley below. Hoists were also used to ferry people back and forth from the valley floor to the summit. David Jessup, who had personal knowledge of that utility car, wrote,

“I soon learned to enjoy riding this flimsy cage. Sudden wind gusts along the Haiku cliff caused it to sway in a very unsteady manner. When wind blew the return cable over the top of the main cable, the engineer at the lower hoist house would stop the cage and jerk it back and forth until the return drive cable was free.”

Today, nothing remains of the hoist except for a rusting motor, a few winches, and colorful graffiti. The view, however, was nothing short of spectacular. From the small concrete window, I could see the entire cities of Kane`ohe and Kailua to the south. Kane`ohe Bay stretched to infinity, a deep turquois blue blanket broken only by speckles of tiny boats and occasional sand bars.

To the rear of the Hoist house was a horizontal walkway that led to the final set of stairs. Although not nearly as steep as the ladder I had just finished climbing, these last steps were really challenging. To the left was a vertical drop off to the valley. To the right, the same. Each time the wind blew I felt slightly off balance. It wasn’t enough to stop my forward progress but it definitely was enough to remind me where I was: nearly 2,700-feet above sea level.

Hand over hand, foot over foot; I crept slowly up the stairs. I felt like I was above the clouds! With one last thrust of effort, I made the summit as a powerful gust of wind nearly knocked me over. “You may have made it,” it roared, “but I’m still in charge up here!”

I won’t argue with that.

At the top looking towards Kane`ohe Bay

From the top I could see almost see the entire island of O`ahu. Between mountain ranges to the east I could make out Moanaloa Valley, where my wife and I lived, and the small pink impression of Tripler Army Hospital. To the north I could see the Ko`olaus stretching towards the North Shore. Although I could not see Honolulu, I could see the highway – a narrow band of grey – running along the twists and curves of the land and disappearing near Koko Head. To the west, Kane`ohe Bay. Below, from whence I came, the H-3. I was so far up that I had difficulty discerning individual cars as they cruised along the most beautiful highway in Hawaii – oblivious to my watchful eye above.

I sat quietly for a moment and listened to the wind. Without a doubt, this was the most exciting and most breathtaking experience of my life. It was something I would never forget and would be hard pressed to reproduce. I felt lucky and I felt truly alive.

I then proceeded to pull weeds.