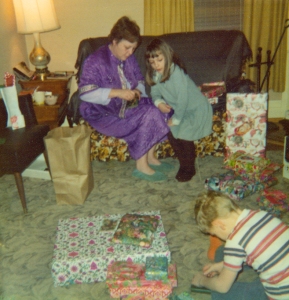 Snow at Christmas, even in Western New York, was never guaranteed and each year we’d have the same worry.

“Is it going to snow for Christmas?” we’d ask.

“But if it doesn’t snow, how will Santa bring us our presents?”

Although we didn’t understand at the time, Santa didn’t need snow to land his sleigh. My proof of this came one year on Christmas morning when my parents called Karen and I outside. It was one of those years when old man winter didn’t make his appearance until well into January. Nevertheless, during our Christmas Eve slumber it snowed. It was not a deep snow or a heavy snow; just a light dusting that barely covered the frozen mud of our driveway. We looked out towards the driveway where I saw the most amazing sight. There, running in two parallel lines, were sleigh tracks! They were faint, broken in some places where the snow had already blown away, but definitely there. From that point forward I knew that Santa didn’t need a lot of snow to deliver his gifts. It’s a memory I will never forget.

Christmases as a child were always the best. Each year our family would buy a real tree and deck it out with pretty glass ornaments, colorful lights, and a whole heck of a lot of hand-made decorations. We would help mom hang our traditional musical gold bell – the one with the pull string in the center – and help her hang her handmade mobile. The mobile had a colorful Santa and his eight tiny reindeer dangling in a circle. As children, my sister and I would always be thrilled on Christmas Eve and we’d make sure Santa had milk and cookies. Mom would make cutout cookies – with our assistance, of course – and we’d munch on a few before bed. When Christmas morning came, we were never disappointed. The milk would be sipped and the cookies eaten.

I owe a lot to my mom and dad for giving us children such magical Christmases. The fact that we were relatively poor didn’t affect the holiday in any way. Dad, who rarely had the same job for more than two years in a row, always seemed to have the funds to provide for us. Mom, who didn’t work when we were children, spent her time taking care of us. Yet year after year my sister and I would always get wonderful gifts. It took me years to figure out how they did it.

Not everything we received was top of the line. Our low income qualified us for a program that distributed toys and food to needy families during the holidays. As a recipient, my parents would take these gifts, wrap them, and slip them under the tree for Christmas morning. Whether or not we asked for these gifts never really crossed our minds. I think my parents – with the limited money they had – focused their gift buying on those items we really wanted. One year I remember asking for, and receiving, the Six Million Dollar Man doll. Slightly larger than your average Barbie Doll, the Lee Majors look-alike had a hole through the back of his head that allowed me to peer through his eye. Now that I think about it, it was pretty creepy. As an added bonus, one of his arms and one of his legs had roll-up skin so I could remove his little artificial electronics. That is even creepier.

Another year I received a toy known as Big Jim’s Sports camper. That same year, Karen received the Malibu Barbie Country Camper. It was nearly identical to Big Jim’s Sports Camper except it was pink. Unlike the Six Million Dollar Man, Big Jim was slightly smaller than a Barbie but made a good companion when my sister and I played Barbie dolls.

While we didn’t know it at the time, mom and dad did something very special for us. Perhaps unwittingly, they taught us that it was not quantity or quality that made Christmas but the sense of wonder. By carefully crafting the events that led up to the holiday, it really didn’t matter what we received. Each Christmas became better than the last.

For years, Christmas Eve was spent at aunt Jean’s house. She always hosted wonderful Christmas Eve family events. It was one of the few times during the year that I had the chance to see other family members. Cousins Tina and Steve were there and so was Uncle Ron. Jean’s house was always warm and inviting and came complete with a large Christmas tree with old-fashioned Christmas lights. These were the large and very hot bulbs that have long since been abandoned for the no so great twinkle lights. Our families would spend the evening talking, drinking, and smoking. This was long before the days when drinking-while-driving was an issue and smoking was common. Us kids would play with their cousins and periodically steal the pepperoni, cheese, and crackers from the little glass trays. I think my favorite was the nut bowl. She’d always have a bowl of mixed nuts and I loved walnuts. There is something special about cracking your own walnut and digging out the meat. I just hated it when I had a piece of shell mixed in my bite.

No matter how cold it was outside, her house was always warm and inviting. Of course all the children would get Christmas presents and we’d always be thrilled. Every once in a while, Uncle Ron would dress as Santa and hand deliver the gifts. Did we know it was he? Probably. But that didn’t matter. It just made us happy. 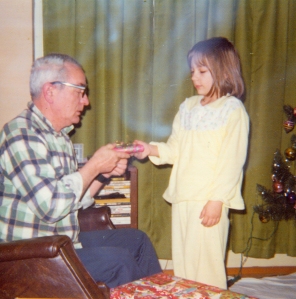 Talking about Christmas Eve at Aunt Jean’s wouldn’t be complete without addressing the one memory that stands out above the rest. I don’t know how old we were but I’m guessing pretty young. While sitting on a chair at Jean’s house, my sister bent over to pick something up from the floor. Jean’s dog, with the loveable name of Poop, seized the moment and proceeded to mate with my sister’s noggin. Fortunately my father was sitting close by and quickly pulled the dog away.

« The importance of location to your life story
Do-it-yourself Family History, Part 2: Diving right in (almost) »

Don’t see too many frogs around here so this little guy is special.
Lightning storm yesterday afternoon. Wow!