The importance of location to your life story 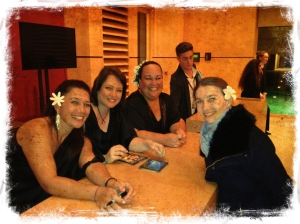 Christine and the trio that is Na Leo Lilimehana

Last night my wife and I had the pleasure of attending a performance of Na Leo Pilimehama at the Green Music Center at Sonoma State University. Having spent the last three years on O`ahu as a member of the United States Coast Guard, watching them was like returning to the beaches of Hawai`i. It got me thinking about how locations can become part of you as much as your family.

Capturing every experience in every location is impossible. Nevertheless, adding those that had the most impact can really spice up an autobiography or biography. For example, unless you lived in Hawai`i, you may never know that geckos poop on the walls. It’s true. It’s also considered good luck to find geckos running around your house. Sure, they may startle you from time to time – especially when you’re in the shower – but they are harmless and actually help. Geckos eat bugs. 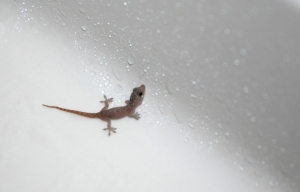 And there are plenty of bugs in Hawai`i. Christine and I lived in Hawaii Kai, a town on the southeastern corner of O`ahu. The area was terrific but the bugs drove us crazy. Ants were always a problem and there wasn’t much you could do about it. Since the weather was always so pleasant, we’d keep the doors and windows open day and night. This invited these little creatures to think that our inside was their outside. More often than not we’d wake up to find ant trails coming in from the lanai, around the corner, along the molding, straight to our garbage disposal in the sink. Were we dirty people? Nope. Dirt didn’t matter. If the ants caught the scent, it was all over. It was time to pull out the Windex (or whatever cleaner we happened to have on hand) and a roll of Bounty. We’d eliminate the pest only to find them marching across the floor a few days later.

Cockroaches were another problem. These little guys enjoyed staying with the Cole family despite my best attempts to send ‘em packing. After a while you just used to seeing them (actually this is not true: but it makes me feel better).

In the evening, as the sun set over the leeward side of O`ahu, I’d always have to make a decision: was I going to sleep in bed or sleep outside. On those particularly blustery days – when the Trade Winds whistled through the banana trees – I was ripe for an outside adventure. On those nights when the Trades were not blowing, I’d avoid the lanai: too many mosquitoes. My hammock and I spent many nights under the stars together.

When writing about your life or those around you, consider asking about the little details. What was it like to live in your hometown? What did you do on Saturday nights? Were there any small things that really made a particular location stand out? Capture these things and write about it. It will make your family history all the more interesting!

I do so love this time of year.
Closest thing to a spirit animal that I have. The deer. 😊