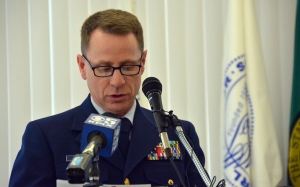 I was given the honor of reading the Presidential Proclamation for Pearl Harbor Remembrance Day on Sunday, December 7, 2014. Prior to reading the Proclamation, I was offered a few minutes to speak. Present were Rear Admiral Joseph Servidio (Coast Guard District Eleven), Captain Michael Woolard (Commanding Officer, Base Alameda), and five Pearl Harbor survivors – most in their mid 90s. It was an honor and a privilege to speak to them.

“I once knew a man that was very familiar with World War II because he saw it firsthand.

“He started active duty in Syracuse, New York on his 23rd birthday in November of 1942. Completing boot camp, he relocated to Goldsboro, North Carolina for 15-weeks of aircraft mechanics school at Seymour Johnson Field.

“Whether or not he knew it at the time, he would soon find himself knee deep in bullets.

“The young man was deployed to the Pacific Theater – not as a mechanic but as a tail gunner on a B-29 Superfortress. For those that don’t know, tail gunners had the lowest survival rate of any aircrew position because they were both the first and last line of defense against the enemy. They were also a primary target.

“This man was involved in no less than five battles and campaigns: China, Central Burma, Air Offensive Japan, India Burma, and Palembang-Sumatra in western Indonesia. When all was said and done, he earned the American Campaign Medal, the Distinguished Unit Badge, the Asiatic Pacific Campaign Medal with one Silver Star, the Good Conduct Medal, three Overseas Bars, and the World War II Victory Medal.

“The man I am talking about is my father, Howard Cole.

“While I am proud of his service, I feel regret. You see, everything I know about my father’s service I gleaned from a single piece of paper – his discharge certificate.

“When I was a young man, I never took an interest in his life. My father rarely spoke about the War and I never asked. I was too busy. I never asked why he decided to join the service. I never asked what it was like to fly on a mission. I never asked if he were afraid. Yes, I will always regret the actions my younger self took because on May 21, 1987 as I was sailing aboard the USCGC MORGENTHAU in the Bering Sea, my dad passed away.

“The moral of this story is simple: ask and listen. These noble men and women have something we will never have: first hand history. They are the eyes and ears to the past and it is through you that their stories will persist.

“I want to express my sincere gratitude to our World War II veterans and those that supported them.

“Your sacrifices have not and will not be forgotten.”

« Do-it-yourself Family History, Part 1
The importance of location to your life story »

I do so love this time of year.
Closest thing to a spirit animal that I have. The deer. 😊