Today I took the plunge and emptied my pockets even more by upgrading my Ancestry.com membership. I added Fold3 and Newspapers.com to my arsenal of genealogical tools. Cool, right? But wait until you hear what my first ever search on Newspapers.com found…

… but first, a brief biography of my father, Howard Theodore Cole.

Dad was born in Syracuse, New York on November 27, 1919 and died May 21, 1987 in Angola, New York. We had a copy of his birth certificate that listed his parents as Frederick T. Cole and Rose Beatrice Dattler. We also had a copy of his marriage certificate and divorce papers from his “first” wife Margery (you’ll understand the quotes in a second). My father and Margery had a son, Charles Stephen Cole. He was born in 1963 and stayed with the family until the early 1970s when he was placed in foster care (a different story completely). We also knew that my father was in World War II, a member of the Army-Air Corps.

Other than that, we knew nothing about him.

Simple. No one ever bothered to ask and he never volunteered. By the time I took interest in searching for my roots, it was 20 years too late. He was already gone.

I began my quest for discovering the Cole lineage with that single birth certificate, the marriage and divorce papers, and the comments he made about World War II. Armed with this, my first duty was to query Veteran’s Affairs for a copy of his discharge papers. Fortunately they had it. With that, I was able to validate the brief comments I heard. I also learned that he began service on November 27, 1942 and exited exactly three years later on November 27, 1945.

I was beyond surprised when I read block 19: MARITAL STATUS. There was clearly an X under married.

Something strange was afoot.

So I did queries on a New York State newspaper site called Fultonhistory.com. This site is an excellent resource for searching millions of newspaper pages for the state. It’s all searchable and downloadable (and it’s free). Since dad hailed from Syracuse, I figured I’d find him somewhere.

And I did. I learned that his discharge papers were correct: Howard Cole was married before. Margery was not his first wife.

I was able to confirm this by comparing his discharge papers to a newspaper article I found about his promotion during Aviation Mechanics School in North Carolina (dated 1943). His military record had him living at 226 Midland Avenue in Syracuse. The promotion article had the same address. It also listed the name of his wife: “the former Bette L. Mills”. 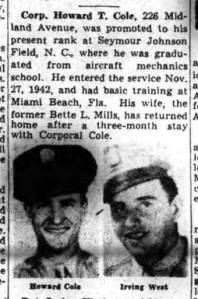 I was able to confirm this from another newspaper that recorded his betrothal. His parents were listed as Mr. and Mrs. Frederick T. Cole.

I thought that was the end of it all until today and my new Newspapers.com subscription. Just for fun I did a search on Howard T. Cole. Here’s what I found:

After two minutes of subscribing to Newspapers.com, I learned that my sister and I have another half-brother out there. Who is this person? Is he still alive? What is his name?

I now have another mystery to unravel!