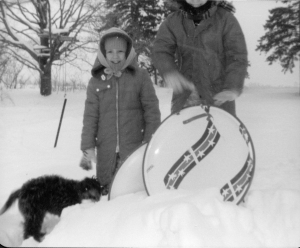 Karen and I take advantage of a snow day.

I was eleven years old when the Blizzard of ’77 hit Western New York (Note to the fine folks living in New York City: Those of us who grew up or currently reside in the Queen City or its suburbs are from WESTERN New York, not UPSTATE New York).

On January 28, 1977, only four months before George Lucas’ Star Wars would release – a film I saw with my Aunt Jean in West Seneca –Buffalo was struck by one of the largest snowstorms in New York history. Known as the Blizzard of ’77, the storm raged on for nearly three days, ending in early February. It stranded nearly 2,000 cars on Main Street in Buffalo and about 8,000 on other streets. Countless other vehicles were stranded in other locations in Erie County including the one I was in.

I don’t remember the time of day, but I do remember that Dad, Karen, and I had just left K-Mart on Route 20 in Hamburg for home. I remembers sitting in the back seat playing with one of those packages of cheap plastic play money when I looked out the car window to a wall of white. Dad, no doubt hoping to make it home before the snow hit, was stopped dead in his tracks on Old Lake Shore Road (now known as Lakeshore Road). Visibility had reduced to zero. He tried to keep the car moving forward but couldn’t: it was gone.

Enveloped in a ghoulish gray-white blanket, the sun having been completely blocked by the fast moving storm, we sat for what seemed like hours. Eventually a snowmobile approached the car and Dad had a few words with the driver. Soon afterwards, all bundled up, the three of us left the car and trekked off into the storm. A short while later we arrived at the doorstep of complete strangers who quickly invited us in.

We were not alone. Others who were surprised by the storm had also taken temporary residence. For the next 24 hours, I found myself surrounded by a whole host of strange individuals. The homeowner, a rotund white man with glasses who sat in his recliner, had a propensity to talk. Not the cleanest of people, he wore a sweaty white tee shirt and covered his bare and chubby legs with a white towel. I remember that this man must have been a current or former employee of Bethlehem Steel because all his stories seem to use the term “hot slag”. To this day the phrase gives me the creeps.

I can’t remember too much about how we spent our time at the Hot Slag house, but we eventually made it home. The car did not. It remained completely buried for days until it was towed home.

Don’t see too many frogs around here so this little guy is special.
Lightning storm yesterday afternoon. Wow!