My Roots: I need to start somewhere

I was born in the city of Buffalo, New York on June 28, 1965. I have one sister, Karen, who was born in Albion, New York about a year and a half later. We share one half-brother named Charles. He was born in 1963 to my father and his second wife but neither my sister nor I know what ever became of him.

Our parents were Howard Theodore Cole and Judith Ellen Hinton. Judith was the daughter of Ruth Caroline Habicht and Raymond Hinton and Howard was the son of Frederick Cole and Rose Dattler. I never knew my paternal grandparents and my father never spoke of them.

I remember my maternal grandparents well, however. For years, Grandma and Grandpa Hinton lived in a small, well-kept house in Wanaka, New York near the shore of Lake Erie. We’d visit them every once in a while but my strongest memories were the holidays. Christmas and New Years was spent eating wonderful snacks, opening presents, and playing with their dogs. From what I remember, they always had two. They were little white fluffy things that always seemed to smell. Despite the doggy scent, neither Karen nor I seemed to mind. We never had pets as children. Christmas at the Hinton’s was also one of the few times we got to see our cousins Tina and Steve. Tina was my age – we went to high school together – but Steve was a bit older. If you think we played together or were excited to see each other, we were not. It’s not that we didn’t like each other; we just had this terrible shyness thing going on – especially Tina and I. It was weird and I can’t explain it. It just was what it was. 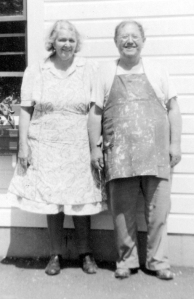 Bertha (Fischer) and George Habicht, circa 1946

My sister and I still refer to Bertha as Old Grandma. She lived in a small house on Old Lake Shore Road in Derby, New York. Derby, a small hamlet of Buffalo, is best known for the Kellogg Estate that runs along the shoreline of Lake Erie. Contrary to what you may think, this is not the Kellogg of breakfast cereal. It’s the Kellogg of linseed oil, Spencer Kellogg. Spencer Kellogg’s grandfather, Supplina Kellogg, began milling linseed oil in 1824 in the Mohawk Valley near Amsterdam, New York. Spencer moved to Buffalo when he was 28 and built his first linseed oil mill in 1879. By 1894, he constructed a second mill, giving him a total of 36 presses, making his the largest linseed oil plant in the United States. The Spencer Kellogg & Sons Company was incorporated in 1912 with its headquarters in Buffalo. They used some of their fortune to build a compound of houses along the Lake. For the longest time my mother cleaned house for the Kellogg descendants. Some claim to fame, huh?

I hate to admit it but had a slight fear of Old Grandma. I don’t think she said or did anything threatening, I think I just feared her age. She had wrinkly and paper-thin skin that seemed to slide weirdly across her bones when you touched her. She also smelled like mothballs. My mother, sister, and I would visit from time to time to check in on her. I don’t remember much about the visits other than having vague recollections of eating hard candy from a floral glass bowl and being told not to touch anything. To her credit, Old Grandma remarried in 1964 to Albert Kruger when she was 73 years old. It even made the local paper. Old Grandma died on April 8, 1980 and was buried at the First Church of Evans in Evans, New York.

Caroline Gouyd Fisher, my 2nd great grandmother, was the daughter of Daniel Smith Gouyd and Harriet Louisa Bangs. It is from the union of Daniel and Harriet that my sister and I descend from Edward Bangs, the Pilgrim. Edward arrived at Plymouth, Massachusetts in 1623 aboard the Anne and was one of the founders of Eastham on Cape Cod.

« My Paternal Great Grandfather, Johann George Dattler
Getting there is half the fun! »